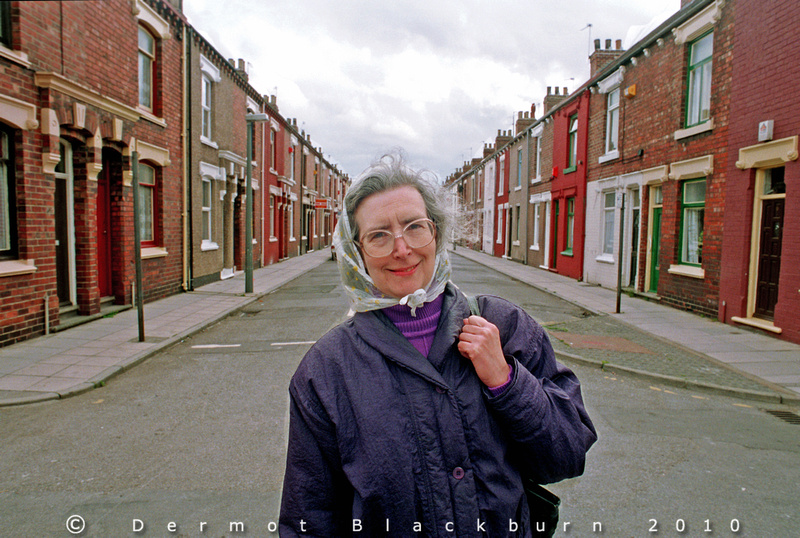 I was saddened to hear of the death of Norah Hill last week. Norah was one of the first Teesside creative people I worked with when I started at TVA (then Cleveland Arts) She was lovely, original and surprisingly funny.

As we’re now housed over the border, so to speak, here is a poem from her book “Over The Border”, MUDFOG, Middlesbrough (1998).

Beyond the railway bridge, towards the docks,
old women wore plaid shawls long after they’d
stopped selling them old clothes in Centre shops;
on Sundays, picked their way through cinder-tracks
and half demolished streets to have a sing
up the damp church until they got a flat.
They’d have a wander in the little Fair.
(Them Gypsies got moved on that used the Waste.)

You’d see them round a bit until they got
the card to shift, the Homeless Men Beyond
Retirement Age in the old pauper lodge.
A man from there liked Mam to cut his cheese.
He’d wait till she was free and watch her weigh.
Happen he liked the way she seems to think
there couldn’t be another one of you.
She’d put an extra grease-proof round his marge.

He used to save the rosiest apple from
the Christmas hampers charities dished out.
He’d bring it for her in a bit of foil.
He’d polish it against his muffler fringe.
One day he left a present in the scales
where she’d be sure to see it, cutting Dutch –
(She never saw him after) – by the wire:
his Lib’ry ticket, not Transferable.

Thanks to Dermot Blackburn and MUDFOG Press.