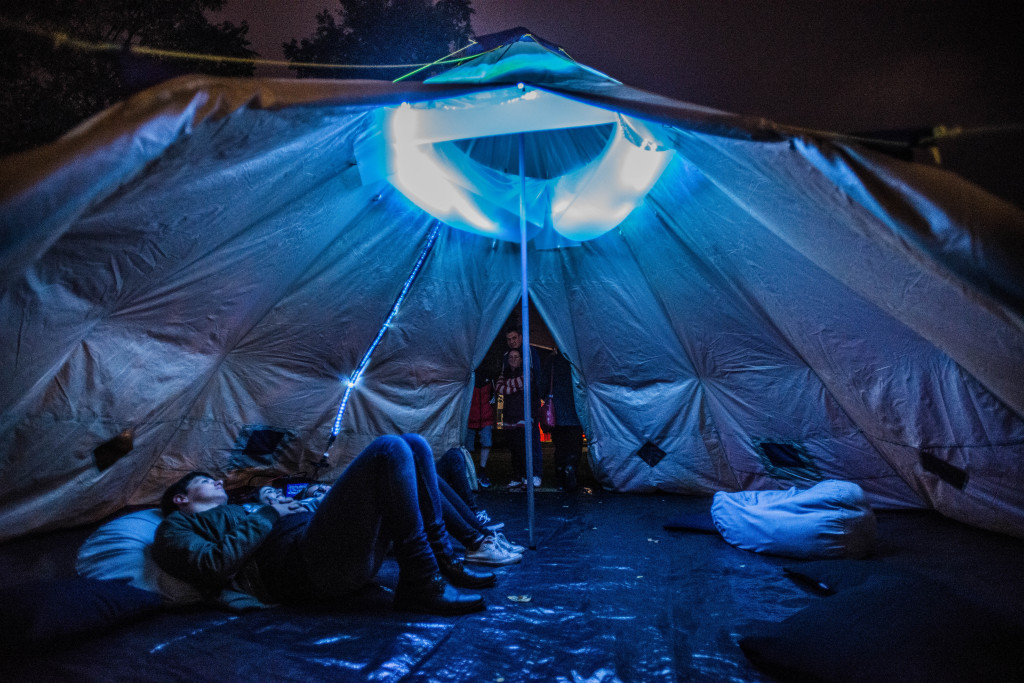 Hello, my name is Namita. I’ve been volunteering at TVA since June. Here’s a little bit about Nightfall, an event I was involved in as an artist that took place on 14th October in Centre Square, Middlesbrough.

Nightfall brought together art installations, performances and workshops related to the wonders of the night sky, on the grass of Centre Square. Organised by Stellar Projects, the event took place in the evening welcoming visitors between 4.30 and 10pm. I created artwork for one of five Stargazing Tents commissioned for the event by Navigator North.

The day started off with rain when I arrived on site in the morning and struggled to set up my tent, hoping that it would subside by evening. Once all the work was installed, the visitors starting arriving, although it was not completely dark yet. My artwork, inspired by the Northern Lights, consisted of a colour changing light installation which created a ring around the tent, whilst crackling, whooshing and bird chirping noises played in the background. These noises were based on reports of sounds heard by viewers of the Aurora Borealis, which in the past few years have been linked to the appearance of the Lights. Visitors to the tent could choose to sit down and experience the installation, and many shared their hopes of seeing the Lights once in their lifetime. Some visitors even spoke about their visits to places like Iceland and Alaska and how they were lucky enough to spot them but were surprised to learn about the sounds of the Lights.

As well as my own installation, there were four other Stargazing Tents by artists Hope Stebbing, Rebecca Nicholson, Saud Baloch and Caroline Devine. Each tent had a different theme or concept that encouraged visitors to interact in a different way. Hope’s tent involved getting visitors to pick through ‘space junk’ sculptures lit with fibre optics – and allowing people to take away small acrylic shapes with them. Rebecca’s tent consisted of a large glowing star, surrounded by shiny folded paper stars on which visitors could write a wish and cast them into the tent. Saud’s tent presented an installation of a rotating black hole, which visitors could view by stepping inside and becoming disorientated. Caroline’s tent looked at ‘Life on Mars’, with fabric prints of Mars’ surface alongside images of her hometown beach, mingled with glowing electroluminescent wires.

In the short time I went for a wander, I also managed to catch a strange, but intriguing, performance in the fountain, as well as a glimpse of workshops for children (and adults) – which included making decorative lights, and glow-in-the-dark string stars. Other installations included a large, rotating cut out sculpture that was illuminated to cast shapes of stars on the ground, and also some neon and glass sculptures by artist Stuart Langley. Despite the chilliness in the air, amidst the twinkling lights and scent of fresh doughnuts, there was a good atmosphere with plenty of interesting activities for those who wandered by.