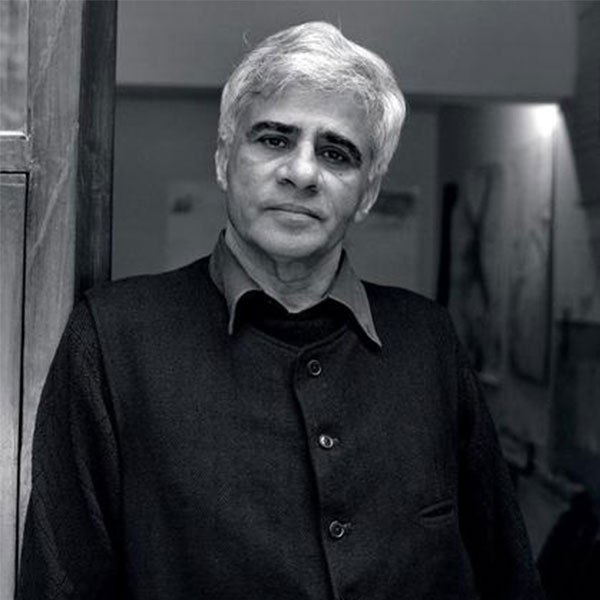 This page presents information regarding painter-conceptual installation artist Vivan Sundaram,  whose work is held as part of the Tees Valley Arts Collection, accessioned by Middlesbrough Institute of Modern Art into the Middlesbrough Collection.

First as a painter and subsequently in large-scale conceptual installations, Vivan Sundaram‘s artistic practice has responded to contemporary politics with radical vanguardism. After graduating from the MS University, Baroda in 1965, Sundaram held a Commonwealth Fellowship for study at the Slade School, London between 1966-68, becoming politically active as a student and remaining so afterwards. Working primarily from Baroda in the 1970s, he participated in the Artists’ Protest Movement and was among a group of emerging artists advocating local concerns through a language of figurative narration.

Artworks in the Collection

Riverscape is an international arts initiative developed by Cleveland Arts and Teesside Tomorrow.

Artists from Japan, India, Poland and Great Britain have worked in Cleveland UK in 1992/93 to study the river Tees and its links with people, community and industry.

Riverscape is one of a number of projects supported by Cleveland Arts to draw attention to the river- a major feature in shaping Cleveland’s history and identity.

Riverscape celebrates major works by artists Takashi Ikezawa, Vivan Sundaram, Hanna Luczak and Graham Crowley – I am grateful to them for their commitment and creative response to the challenge of Riverscape.

Brian Coldwell and Alan Timothy of Teeside Tomorrow with Visual Arts Officer Steve Chettle created an important opportunity for international partnerships. Artists have worked in Hartlepool, Langbaurgh, Middlesbrough and Stockton. Acknowledgement is made, with thanks to curators and staff of Cleveland Gallery, the Gray Art Gallery, Kirkleatham Museum, Middlesbrough Art Gallery and Billingham Art Gallery; especially to Vivienne Morpeth and Stephanie Smith for exhibition and project assistance. Deanna Petherbridge has generously given time, enthusiasm and great interest to write about each artist’s work in this publication.

Riverscape promotes new creative frontiers for artists and international cultural collaboration. the project gives profile to contemporary art practice by professional artists on Teesside as part of developments to 1996 when the Northern Region is UK region of the Visual Arts.

Let us know more about this artist or work

Read about other works in the Collection