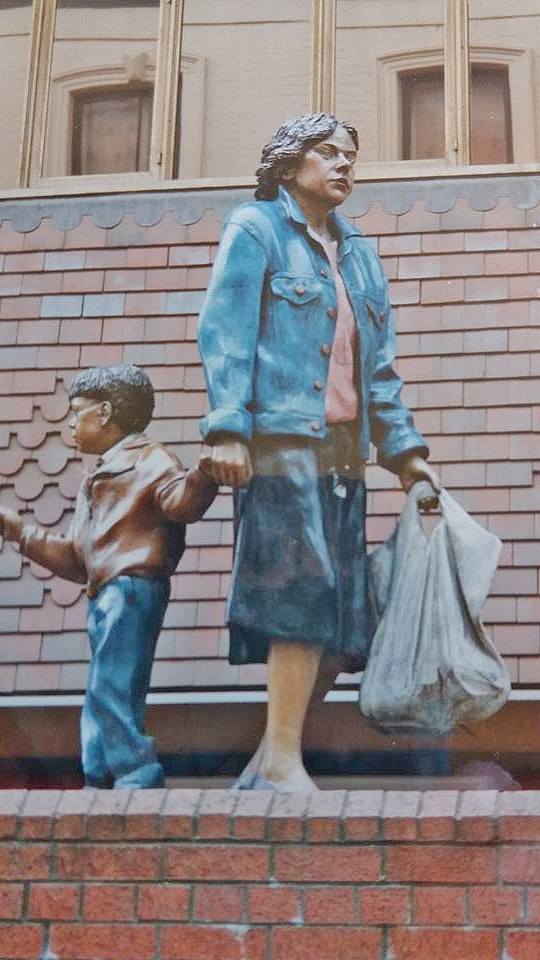 Those of us of a certain age will remember the Shopper and child, which used to stand on a plinth just outside the Cleveland Centre on Linthorpe Road.

It was an early work by Barnsley’s Graham Ibbeson and was based on members of his own family: the Shopper and Child were modelled on Graham’s wife Carol and son Max (who is pointing excitedly at his grandad).

The statues appeared in late 1983 as part of The Urban Programme, a government initiative that granted funds for public works in the 1980s and ’90s. Their lifespan wasn’t entirely without incident; they tended to attract late night revellers from the local pubs and clubs and the Shopper lost an arm a few years after its installation (it was swiftly repaired).

Shopper and child watched over shoppers until the early ’90s, before being removed when the area was remodelled. Afterwards, the statues were kept in storage at Stewart Park, before eventually ending up in the garden of Ayresome School some years later (where they were repainted by staff and students).

Shopper and child was not Ibbeson’s only work in the town; he also created the partner work The Gardner and he later created The Scales of Justice, which stands outside the Combined Court Centre in Middlesbrough.

Many thanks to Tony Duggan, former Development Manager at Middlesbrough Council, for providing additional information on these works.

The work was funded through the Middlesbrough Urban Programme.