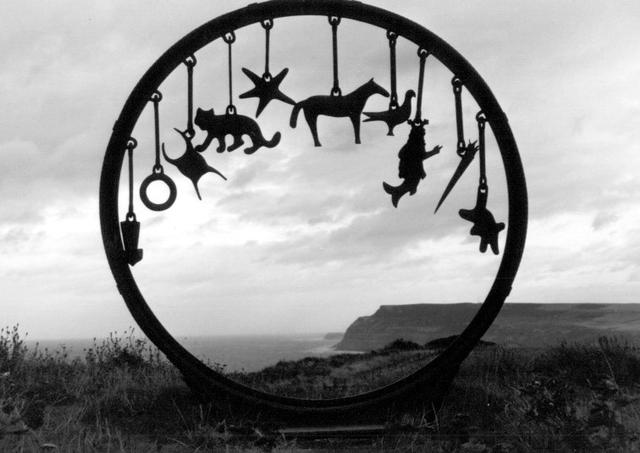 Three steel sculptures sited a short distance from one another above a 300ft high cliff. Trawl Door is a representation of the doors of an open trawl net with its catch: a large fish and plankton. Pillar is a ridged marker post, supporting a chain of four metal sculptures which represent a star; the top of a plant growth; the shape air makes when striking a surface; a jellyfish and its reflection in the water. Circle is the largest work: ten figurative sculptures hang on metal rods from a large steel hoop.

The clifftop sculptures were the result of a three month ‘New Milestones’ residency commissioned by the local parish council. Constructed at the British Steel plant in nearby Skinningrove, each piece is made from locally produced metals and refers to the industrial, social and natural history of the district. Farrington lived in the area of Skelton collaborating with the commissioners and a local support group on the subject of his work. Trawl Door takes its form from equipment used by fishermen in Whitby and the figurative elements in Pillar are intended to symbolise sky, earth, air and sea. The Circle includes the three dimensional representations of the Cleveland Bay Horse and a cat (in the 1300s cats were hunted on the cliff). Described by the sculptor as a ‘giant charm bracelet’, The Circle has become a local landmark of some distinction. In 1996 vandals, having used specialised tools to saw through the work at its base, rolled the sculpture into the sea. Only the figure of a horse was recovered. Farrington’s new circle, a replica of the first, has been the site of a Midsummer Day wedding and the subject of stories by a Saltburn writers’ group.(1) The New Milestones project was part of a Cleveland-wide arts initiative to link sculpture and the environment. Organised by Cleveland Arts in association with Common Ground, the scheme received additional funding from Northern Arts, British Steel and Langbaurgh Borough Council.(2)

Let us know about Trawl Door, Pillar and The Circle

If you have information about Trawl Door, Pillar and The Circle – particularly if it’s not shown above – then we’d be really interested in finding out more. Tell us below: