This page is about an anthology of poetry called "Sweet Water" and it was published on the 5th of June 2015.

END_OF_DOCUMENT_TOKEN_TO_BE_REPLACED

This page is about an the anthology of children's poetry called "In Our Street" which was published on the 9th of October 1993.

END_OF_DOCUMENT_TOKEN_TO_BE_REPLACED

The Breathless project was an Anthology of Poetry by Ian McMillan and Mark Robinson.

END_OF_DOCUMENT_TOKEN_TO_BE_REPLACED

This page is about one of the poems that is part of the anthology of children's poetry called "Running Like the Clappers" which was published on the 8th of October 1994.

END_OF_DOCUMENT_TOKEN_TO_BE_REPLACED

This page is about the poem called Bananas! which is an anthology for children's poetry and it was released on the 7th of October 1995.

END_OF_DOCUMENT_TOKEN_TO_BE_REPLACED

This page is about one of the poems that is part of the anthology of children's poetry called "Boom Boom Bang" which was published on the 12th of October 1996.

END_OF_DOCUMENT_TOKEN_TO_BE_REPLACED

Every now and again, I’ve thought of this project. The big, beautiful catch we couldn’t quite land. The idea was to get 100 poets to write 10 lines each and therefore have 1000 lines to mark the start of the new millennium, with each poet passing the task on to another of their choosing – a kind of chain poem.

Unfortunately, like most chain letters, as it went on the breaks seemed to get more and it was abandoned. Memory no longer serves quite when or how – I suspect it was to do with my leaving Cleveland Arts, but I’m not sure. Let’s pretend a man from Porlock called at the office and told us we had better things to do.

Reading the 28 sections surviving, I am reminded of how exciting it was for these sections to arrive in my in-box, and to see the links between the poets. We started with Simon Armitage, who was later the official poet for New Millennium Experience Company, the people behind ‘the dome’. Simon later wrote a 1000 line poem of his own to mark the millennium, Killing Time. But then the chain took on an energy of its own.

There are poets here from England, Ireland, Scotland, the US and Australia. You can join the dots and see connections between writers across continents, friendships, collaborations, joint endeavours. Some of the writers were not well known in the UK at the time. Claudia Rankine, who won last year’s Forward Prize for her remarkable book, Citizen: An American Lyric, for instance, was new to us at that point.

The poetry itself shows a mixture of cautious or ironic celebration (‘Ladies and gents, a toast. Now watch this space.’ says Sean O’Brien, for instance), a gladness to be leaving the 20th century (‘this scarred century’, as Brendan Kennelly calls it) and a good deal of anxiety.

Perhaps many of the poets here refuse, with Linda France, to believe ‘the lie that time is a line’. Maybe that’s why we ran out time and lines, so have only this fascinating fragment of the big one that got away.

Filed under: NewsTagged with: Millennium, Poetry 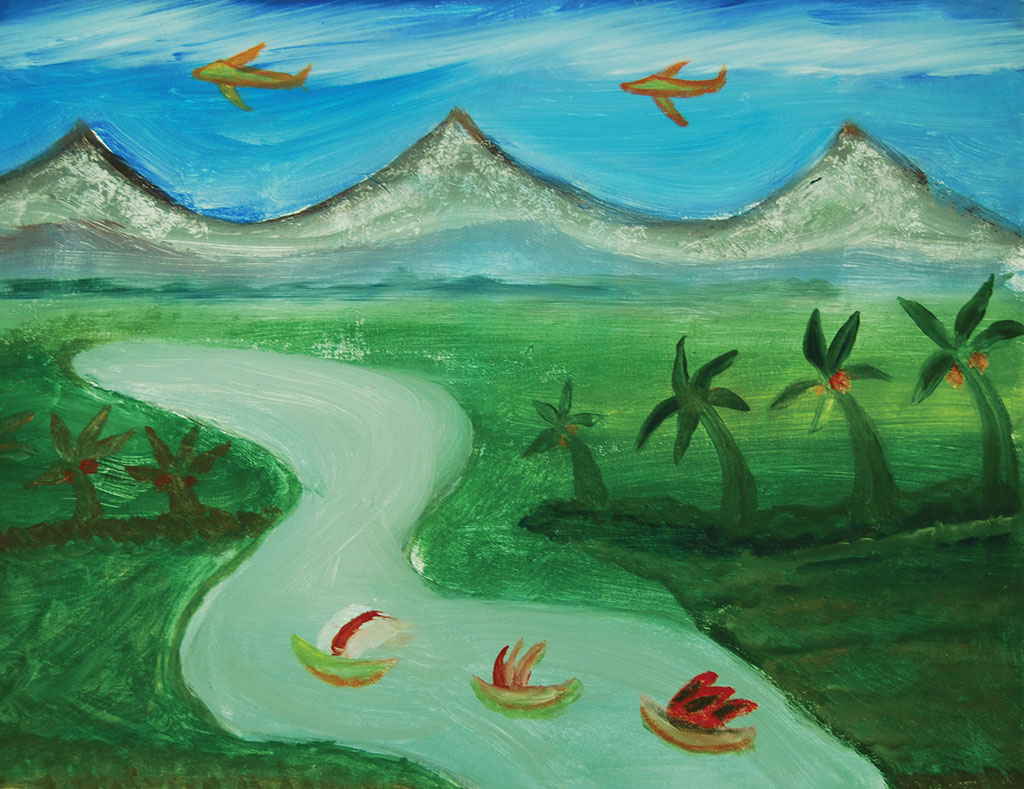 Water is a universal treasure for life

We exploit its abundance

Relax and feel its flow

For our daily chores

Sweat cascading in droplets as we work

It comes from far away

Bringing with it the gift of life

Into tributaries, into steams and rivers

Water is the soul, pure and crystal clear

Gem of the world

Some get their water from turning the tap to the right

Others get water by walking in the blazing heat

Some must get their water by hard work and effort

Others get their water without a thought

Some get their water when it falls from the sky

Others bring water from a stream on a donkey

Some get their water from the river or the lake

Others buy their water bottled in plastic

Some get their water by just pressing a shower button

Others buy their water by a barrelful from a wagon

Some get their water from buckets filled by the rain

Others get their water from the pipes in their home

Some get their water by chance from a rain dance

Others sip at water droplets left upon the leaves

Some draw their water from the village pump

Others get their water from a nearby shop

Some get their water by digging a deep well

Others get their water by distilling the ocean

Some get their water from a mountain spring

Water connects me to all my neighbours across the world

Water links the cells in my body so I can breath

Water connects one shore to the other

Water joins the forces in nature to bring about life

Water connects me and my friends

Water marries my life with those who came before me

Water connects the plains and the mountains

Water links one city to another city

Water marries all humans to the planet