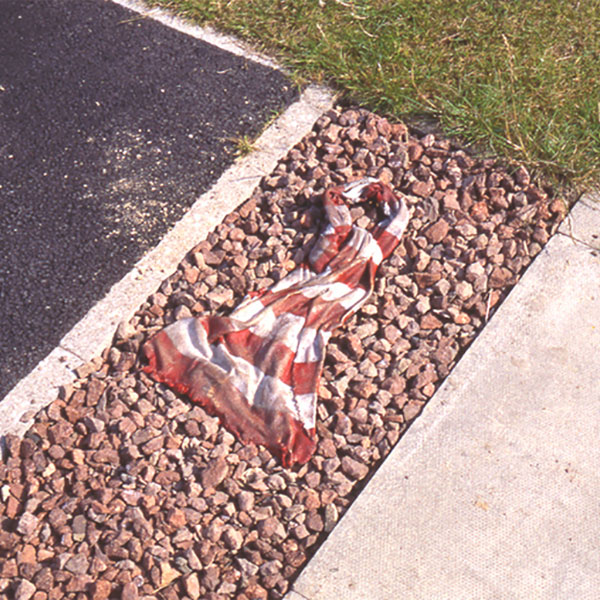 To mark the historic former home of Middlesbrough Football Club, Neville Gabie proposed a series of small interventions across the whole site. By overlaying historic maps of the football ground on the site plan by Wimpey Homes, Gabie was able to accurately identify the location of the centre spot, penalty spots, touchlines, stands, entrance gates etc. Each of these was marked using text and bronze casts which referred to the site’s historic use as well as the current context, a housing estate. A pair of bronze football boots for example is permanently installed adjacent to a front door, as if just taken off. They also mark the exact location of the centre circle. The intention is to leave a trail, which the interested can follow, but in such a subtle fashion that for those less interested, the work is hardly noticeable. To achieve this, particularly given that most the artworks are installed on private property, required considerable involvement and co-operation with the resident community, developed over nearly two years of consultation.The publication that accompanies the project includes archive photographs and a text by Harry Pearson.

Neville Gabie notes in the book,

“Yes it’s true, Boro have never won a major Trophy, but walking around the estate and speaking to supporters you realise very quickly that the real prize here are the fans. I always wanted to mark the fans part in what made Ayresome special and the only proper place to do that was the Holgate End.”

“Neville Gabie’s practice has always been driven by working in response to specific locations or situations caught in a moment of change. Highly urbanized or distantly remote, his work is a response to the vulnerability of place. Gabie’s interest is in establishing a working relationship within a particular community as a means of considering its physical, cultural or emotional geography.”

Let us know about The Trophy Room

If you have information about The Trophy Room – particularly if it’s not shown above – then we’d be really interested in finding out more. Tell us below: