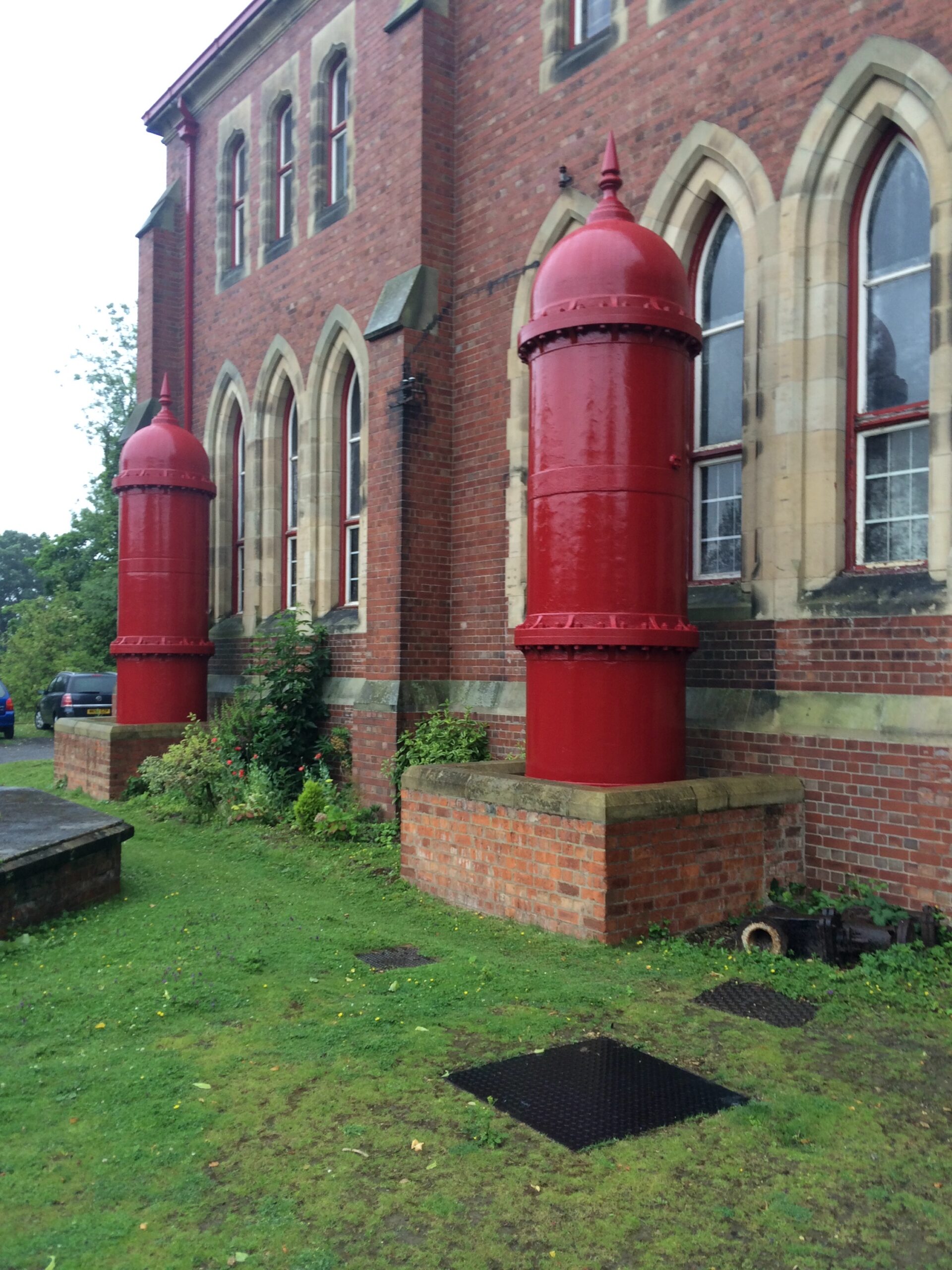 Yesterday Ree and I set out from Tees Valley Towers for the morning (sorry if anyone called! Row is away and Miki was in Birmingham) and headed off for Darlington to visit one of our fellow River Tees Rediscovered partners: the volunteers who run the Tees Cottage Pumping Station… Unfortunately it wasn’t so easy to find, despite “help” from google maps…

So we parked in Broken Scar Park whilst trying to find our bearings, the pump house does not have the best signage… Even running slightly late, and in the rain, Ree had to be persuaded that we didn’t have time to play in the playground!

I was fortunate enough to be tagging along (not normal for us back-office types, but a history degree is occasionally useful) so I didn’t know what to expect and Ree had only the vaguest of briefings that this was a target site for the project. The first few signs weren’t promising:

But once we got into the site it was pretty spectacular:

Although it seemed as abandoned as the Mary Celeste, but at least there was shelter from the rain:

Shortly after we were joined by: Pam Lovell, from Northumbrian Water (site owners); Rob George, from Darlington Borough Council; John West, who would be leading our tour; and finally by Christine Corbett, from Groundworks.

We were led along the tracks of the model railway, behind the main building and came to the old wardens cottage where we were greeted by some of the other volunteers serving hot tea and choccy biscuits, who gave us some background about the site:

“Tees Cottage really is unique. An analysis of 115 other sites in England, Scotland and Wales … shows that while 50% of them have one or more engines in steam, very few are on their original site and using their original boilers, and only one on the listing, a gasworks exhauster engine in Scotland, can still do its original duty. Given that Tees Cottage also has what is believed to be the largest working preserved gas engine in Europe and still has all the electric pumps and switch gear from 1926, and still pumps water as intended, this station is a very rare opportunity for future generations to study not only the total history of water pumping and engines but also the totality of life in the Victorian and Edwardian era in a complete and original context”, H C Devonshire

Since 1981 volunteers had been running the site for what is now Northumbrian Water, which still uses the much larger Broken Scar Pumping and Processing Facility over the road to serve water to the Tees Valley.

The site, particularly when combined with its modern equivalent across the road, is a complete representation of the development of piped water in the UK.

Initially built to supply Darlington with clean water, it was soon expanded to provide water to Stockton and the growing Middlesbrough, becoming the main site what is now the Tees Valley.

It has been lovingly preserved by its volunteers and though somewhat dilapidated it has the potential to be one of the most significant sites of industrial revolution still present in the Tees Valley and the North East.

You can read more on wikipedia here, on the Tees Cottage Pumping Station website here or follow them on Facebook here. Or if you want to know about the River Tees Re-discovered Project in general click here.